Home › Politics › Socialism’s future may be it’s past…

Socialism’s future may be it’s past… 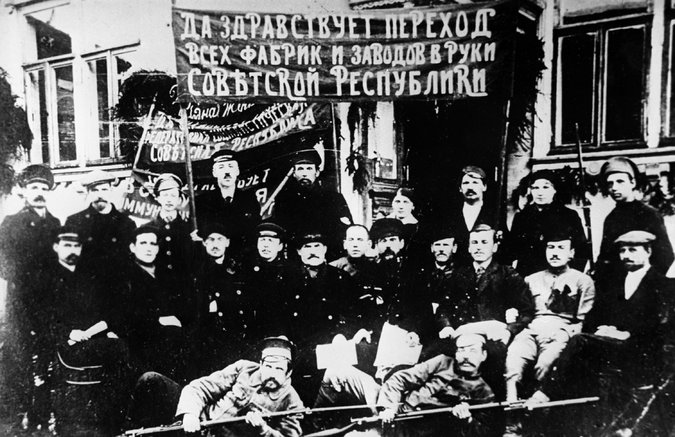 One hundred years after Lenin’s sealed train arrived at Finland Station and set into motion the events that led to Stalin’s gulags, the idea that we should return to this history for inspiration might sound absurd. But there was good reason that the Bolsheviks once called themselves “social democrats.” They were part of a broad movement of growing parties that aimed to fight for greater political democracy and, using the wealth and the new working class created by capitalism, extend democratic rights into the social and economic spheres, which no capitalist would permit.

The early Communist movement never rejected this broad premise. It was born out of a sense of betrayal by the more moderate left-wing parties of the Second International, the alliance of socialist and labor parties from 20 countries that formed in Paris in 1889. Across Europe, party after party did the unthinkable, abandoned their pledges to working-class solidarity for all nations, and backed their respective governments in World War I. Those that remained loyal to the old ideas called themselves Communists to distance themselves from the socialists who had abetted a slaughter that claimed 16 million lives. (Amid the carnage, the Second International itself fell apart in 1916.)

Of course, the Communists’ noble gambit to stop the war and blaze a humane path to modernity in backward Russia ended up seemingly affirming the Burkean notion that any attempt to upturn an unjust order would end up only creating another.

Most socialists have been chastened by the lessons of 20th-century Communism. Today, many who would have cheered on the October Revolution have less confidence about the prospects for radically transforming the world in a single generation. They put an emphasis instead on political pluralism, dissent and diversity.

Still, the specter of socialism evokes fear of a new totalitarianism. A recent Victims of Communism Memorial Foundation report worries that young people are likely to view socialism favorably and that a “Bernie Sanders bounce” may be contributing to a millennial turn against capitalism. Last year, the president of the United States Chamber of Commerce, Thomas J. Donohue, even found it necessary to remind readers that “Socialism Is a Dangerous Path for America.”

The right still denounces socialism as an economic system that will lead to misery and privation, but with less emphasis on the political authoritarianism that often went hand in hand with socialism in power. This may be because elites today do not have democratic rights at the forefront of their minds — perhaps because they know that the societies they run are hard to justify on those terms.

Capitalism is an economic system: a way of organizing production for the market through private ownership and the profit motive. To the extent that it has permitted democracy, it has been with extreme reluctance. That’s why early workers’ movements like Britain’s Chartists in the early 19th century organized, first and foremost, for democratic rights. Capitalist and socialist leaders alike believed that the struggle for universal suffrage would encourage workers to use their votes in the political sphere to demand an economic order that put them in control.

It didn’t quite work out that way. Across the West, workers came to accept a sort of class compromise. Private enterprise would be tamed, not overcome, and a greater share of a growing pie would go to providing universal benefits through generous welfare states. Political rights would be enshrined, too, as capitalism evolved and adapted such that a democratic civil society and an authoritarian economic system made an unlikely, but seemingly successful, pairing.

In 2017, that arrangement is long dead. With working-class movements dormant, capital has run amok, charting a destructive course without even the promise of sustained growth. The anger that led to the election of Donald Trump in the United States and the Brexit vote in Britain is palpable. People feel as if they’re on a runaway train to an unknown destination and, for good reason, want back to familiar miseries.

Amid this turmoil, some fear a return to Finland Station via the avuncular shrugs of avowedly socialist leaders like Mr. Sanders and Jean-Luc Mélenchon in France. But the threat to democracy today is coming from the right, not the left. Politics seems to present two ways forward, both decidedly non-Stalinist forms of authoritarian collectivism.

“Singapore Station” is the unacknowledged destination of the neoliberal center’s train. It’s a place where people in all their creeds and colors are respected — so long as they know their place. After all, people are crass and irrational, incapable of governing. Leave running Singapore Station to the experts.

This is a workable vision for elites who look at the rise of an erratic right-wing populism with justified fear. Many of them argue the need for austerity measures to maintain a fragile global economy, and worry that voters won’t take their short-term pain to spare themselves long-term dysfunction. The same goes for the looming threat of climate change: The science is undisputed among scientists, but is still up for debate in the public sphere.

The Singapore model is not the worst of all possible end points. It’s one where experts are allowed to be experts, capitalists are allowed to accumulate, and ordinary workers are allowed a semblance of stability. But it leaves no room for the train’s passengers to yell “Stop!” and pick a destination of their own choosing.

“Budapest Station,” named after the powerful right-wing parties that dominate Hungary today, is the final stop for the populist right. Budapest allows us to at least feel like we’re back in charge. We get there by decoupling some of the cars hurtling us forward and slowly reversing. We’re all in this together, unless you’re an outsider who doesn’t have a ticket, and then tough luck.

The “Trump train” is headed this way. President Trump can’t offer tangible gains for ordinary people by challenging elites, but he can offer a surface-level valorization of “the worker” and stoke anger at the alleged causes of national decline — migrants, bad trade deals, cosmopolitan globalists. The press, academia and any other noncompliant parts of civil society are under attack. Meanwhile, other than having to adjust to more protectionism and restrictive immigration policies, it’s business as usual for most corporations.

But there is a third alternative: back to “Finland Station,” with all the lessons of the past. This time, people get to vote. Well, debate and deliberate and then vote — and have faith that people can organize together to chart new destinations for humanity.

Stripped down to its essence, and returned to its roots, socialism is an ideology of radical democracy. In an era when liberties are under attack, it seeks to empower civil society to allow participation in the decisions that affect our lives. A huge state bureaucracy, of course, can be just as alienating and undemocratic as corporate boardrooms, so we need to think hard about the new forms that social ownership could take.

Some broad outlines should already be clear: Worker-owned cooperatives, still competing in a regulated market; government services coordinated with the aid of citizen planning; and the provision of the basics necessary to live a good life (education, housing and health care) guaranteed as social rights. In other words, a world where people have the freedom to reach their potentials, whatever the circumstances of their birth.

We can get to this Finland Station only with the support of a majority; that’s one reason that socialists are such energetic advocates of democracy and pluralism. But we can’t ignore socialism’s loss of innocence over the past century. We may reject the version of Lenin and the Bolsheviks as crazed demons and choose to see them as well-intentioned people trying to build a better world out of a crisis, but we must work out how to avoid their failures.

That project entails a return to social democracy. Not the social democracy of François Hollande, but that of the early days of the Second International. This social democracy would involve a commitment to a free civil society, especially for oppositional voices; the need for institutional checks and balances on power; and a vision of a transition to socialism that does not require a “year zero” break with the present.

Our 21st-century Finland Station won’t be a paradise. You might feel heartbreak and misery there. But it will be a place that allows so many now crushed by inequity to participate in the creation of a new world.